The Plane Now Standing at Platform 3 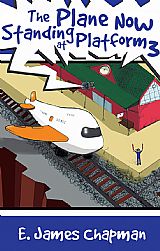 The Plane Now Standing at Platform 3 is a book by E. James Chapman.

It tells the hilarious story of how things went when he decided to take his family on holiday.

How hard, one might have thought, could it be to take a family from Spain to Canada by air, have a good time in Canada and then fly back to Spain?

They meet up with a family that were so vile and so badly behaved that they would probably be barred from Hell, they then find a riot in the baggage hall, suffer from food poisoning and find themselves on a plane with some passengers driven to -quite understandable, really, given the rather trying circumstances- hysteria when the pilot announces that he "has lost the runway and can't find it" and several passengers began to hammer on the cockpit door, begging the pilot to "please!" take them down.

Well, that's fine, then? I mean, how could things really get any worse than that?

Oh, continue to read the hilariously harrowing (or harrowingly hilarious, take your pick) tale of the rest of the holiday, because, it seems that the flight out was really just a warm up act for the real horrors of this holiday!

There are airport staff who seem completely unfamiliar with how to operate their own computer systems, a pilot who seems unable to work out how much fuel he will require, and Canadian police officers who seem to be utterly bewildered by the concept of a country called Spain, with people living in it with British accents.

And who were utterly bemused by the concept that to the people of Spain their country is not Spain, but Espana. And also bewildered by the fact that they had had an encounter earlier that day with an Indian woman who had a British passport.

The Chapmans were also almost arrested by the officers for having friendly children (travel advice that you do not get on TripAdvisor is: "Do not be over-friendly in Canada as it confuses the inhabitants and makes them think you are up to something nefarious, like kidnapping your own children. For example.")

Eventually they were allowed to leave Canada (much to the annoyance of Eugene, find out about him in the book, OK?) and that should be that, right? All back to normal?

Well, no. Next came Jim getting stuck to a vacuum wielding airplane toilet seat. Just before his bowels... perhaps you'd best read the rest of this bit in the book...

There next came a fight with baggage handling systems and an unfortunate encounter on the London to Malaga return flight with a woman who was so large that she did not realise she was pregnant, not even when her waters broke. So the pilot made an emergency landing in France. Where the large pregnant woman was met with collapsable stretchers. Which almost certainly weren't supposed to be collapsible. And which probably assisted the woman in giving birth on the floor of the aircraft.

To learn more about the rest of the disasters, you'll need to buy the book published by Matador (in the That's Books and Entertainment bookshop to the right hand side of this review) for £8.99.