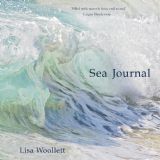 Sea Journal, written by Lisa Woollett, is one of the best researched, best written, most readable books that I have encountered in many years.

It is a wonderful book that covers a year long wandering along the coastal areas of Britain.

Lisa covers a wide range of topics and subjects. From natural history to evolution, to geology, latest scientific thinking and ancient myths and racial memories of cataclysmic floods that radically altered the shape of the British Isles, meaning that vaste swathes of land were lost to what is now the North Sea and the Irish Sea.

We learn about an adult and a barefooted four year old child who were walking through a forested area in Wales in what is now Cardigan Bay. We know this event happened because they left their footprints, now visible again, after they were created at some time between 4,000 to 6,000 years ago.

We read about skates and rays, of lost forests once again rediscovered thousands of years later, of great storms of the past that helped alter the very shape of our lands.

Then there's the tale of the Great Lego Spill of 1997. Whe3n five million Lego pieces were lost overboard in a great storm.

There's images of seaweeds of various types washed up after storms, branched sponges and of sea monsters heard and monsters seen. And, of course, identified as not being especially monstrous at all.

Lisa also meets wavewatchers who like nothing more than to visit the beaches and watch out for bigger and better waves, a potentially risky sort of a pastime, others who are beachcombers like Lisa, people who search out and seek out items that have been washed ashore.

(EDITOR: When I was a child I lost my spade on a beach in Wimereux, a coastal town in Northern France. We returned the next year. And, to my delight, I found what I considered in my childish enthusiasm to be moy spade. It had been battered by the waves and smoothed by the sands of the beach so was not exactly the same,m but in my heart I knew it was my wooden and metal spade. But I left it as I knew, even at that young age, that it was no longer truly mine, that it belonged on the beach of Wimereux.)

That incident left in me a sense of wonder about all things coastal. A wonder that this book has rekindled.

It is published by Zart Books (www.zartbooks.co.uk) in association with the Eden Project and costs £14.99. It's a book for everyone, but will make a welcome addition to any council library service and to any school, college or university library.

You can buy the book at the That's Books and Entertainment Bookshop, which you will find to the right hand side of this book review. Or to make a direct purchase of the title please visit https://goo.gl/MBWfyo.