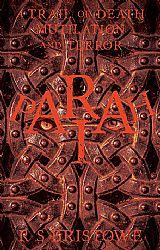 Pariah is a début novel from R. S. Bristowe, an author from the Eastern county of Leicestershire.

It tells the story of Eddie Boyle. Life has some amusing little tricks it plays upon us, from time-to-time.

In Eddie's case the trick is that by the time he is in line to receive it, the title Tenth Marquess of Exwick as without any value or worth at all! Or so Eddie is led to believe.

But Eddie soon receives a phone call from a vicar in Cambridgeshire. It concerns a mysterious and ancient treasure, rumoured to be "priceless" of the Fen Tigers.

Eddie decides to pay a visit to this mysterious clergyman and he arrives in the village of Herne Fen.

Eddie picks up on the fact that something is bothering the locals, worrying them, perhaps? Because their behaviour is more than a little disconcerting, to Eddie's way of thinking.

But then, and before Eddie has the chance to learn more about the village of Herne Fen, the vicar vanishes.

This is treated by the local police as a simple missing person enquiry (even though the disappearance of a Church of England clergyman is hardly a run-of-the-mill experience) but soon it becomes a murder enquiry.

But there's something happening, something that is very unpleasant as the case quickly widens to cover not only a recent spate of murders but also to a number of much older murders.

Soon Eddie Boyle is on the trail of the search of the priceless and ancient treasure of the Fen Tigers. And the trail is littered with mutilated corpses and sheer terror.

This book is published by Matador at £8.99 and is available from the That's Books and Entertainment bookshop, just to the right of this review.