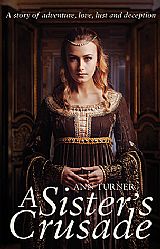 A Sister's Crusade is a historical novel set in the times of the Crusades.

Written by novelist Ann Turner (author of Heartsease) tA Siater's Crusade tells the story of two sisters, Aubrette and Rowena. However, they grow to maturity unaware that they are related, that they are, in fact, sisters.

Rowena meets the man who is destined to become her future husband, Simon Fitzroy, who is one of the illegitimate offspring of King Henry II.

However, that day was to be a fateful day for other reasons, as it was also on that day that Aubrette discovers that they are related. That they are, actually, daughters of the local lord.

Aubrette stays with her sister, even serving as her maid after Rowena becomes married.

There is an incident that is most tragic and, Aubrette becomes the secret lover of Simon, her sister's husband.

Her sister is kept in the dark about the affair, until Aubrette becomes pregnant by her lover.

After the child is born, the baby boy is taken away from Aubrette and is given to Rowena for her to raise as her own child.

Aubrette, who thought that Simon was truly in love with her, was married, however unwillingly, to Hugh, who is a companion to Duke Richard who is a loyal and faithful friend of Simon.

However, when the King dies, Richard I succeeds him to the throne and he journeys with Simon to the Holy Land for a Crusade.

Aubrette and Rowena accompany them on the long, perilous journey as attendants to Queen Berengaria, Richard's wife, who has not been given the attention that is due to the wife of the King.

There are a whole series of calamitous and traumatic events that beset them and Simon marries Aubrette in Cyprus, before they return to England.

Now back at home, Aubrette believes she has settled into a life of comfortable domesticity. Life, it seems, is perfect.

Or is it? Can a threat from an enemy from a totally unexpected quarter spell ruin for her happiness?

This book is destined to become a classic of its genre.

It costs £9.99 and is published by Matador and is available through the That's Books and Entertainment bookshop, the portal to which is to the right side of this review.