The Horch and the Rotterdam ingots 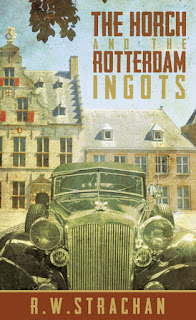 In The Horch and the Rotterdam Ingots, former detective and armed guard at a prime ministerial residence in East Sussex, author R. W. Strachan tells the compelling and exciting tale of four Wehrmacht officers who are given the task of removing in excess of 4,000 gold ingots from the vaults of a bank in Rotterdam.

The temptation they face is far too much And, well, who will miss the 40 ingots that they decide to liberate from the hoard?

They decided to stash these ingots in a secret safety deposit box in a bank in neutral Switzerland for their use after the hostilities were over.

However, this operation to free the golden 40 is taking place during the trying conditions of the Second World War and the final ten gold ingots never make it to their destination.

Their fate is to be stashed away, in secret, within the hollow chassis of a German officer's staff car, a Horsch.

70 years after these events a young English oil executive by the name of Calum Breffit finds himself working for a Texas-based oil firm in ther office in Baku, the capital city of Azerbaijan.

Whilst on a trip to the town of Kharkov in the Ukraine, Calum's car fails and he finds it necessary to seek the shelter of a farm in a remote rural area.

Within the buildings of the farm complex he discovers the abandoned Horch, covered in tarpaulins. The staff car still bore its official swastika pennants and bore enough traces of its sinister past to make it obvious what its original purpose had been.

Calum decides that he is going to rebuild this car and, as he starts to work on the car he begins to uncover the troubled backstory of of the vehicle, discovering links with the defeat of the German armies at Stalingrad and he discovers that the past has a way of linking to the present day, often in ways that involve one's own present in a way that was very unexpected.

This is an intriguing and charming tale and is published by The Book Guild at £8.99 in paperback.

It's on sale via the Thats Books and Entertainment online bookshop, the portal of which is to be found on the righthand side of this review.
Posted by Martin S at 15:47