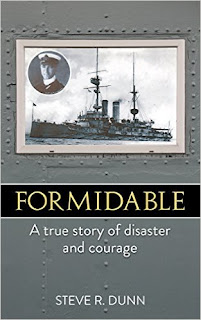 It is the third in a trilogy of naval history books.

It is a well-researched book that shows how, because some senior officers in the Royal Navy were using rules of engagements that had, in the main, stayed the same for 100 years, the Royal Navy suffered some jaw-droppingly ridiculous losses of ships and men during World War 1.

Rule of engagement that were suitable for the days of Lord Nelson and fighting set piece battles under full sail were worse than useless when one faced a modern enemy using modern equipment including submarines.

Dunn points out that, because a Vice Admiral thought it "unmanly" for his ships to seek shelter during storms that the ships under his disastrous command were forced to remain at sea, as he ignored the ever-present threat of attack by U-boats because to his sclerotic thought processes, the use of U-Boats to attack enemy ships from beneath the surface of the water would be utterly unthinkable due to the fact that it would be ungentlemanly behaviour.

Because of his tactical blunders Formidable, captained by Noel Loxley (accompanied by Bruce, his  terrier) went down with a completely inexcusable loss of nearly 600 men and boys.

Captain Loxley decided to remain on board Formidable as it sank, accompanied by his faithful companion, Bruce.

Dunn not only explains what happened but also explores why it happened and also makes a careful examination of the stories of some of the individuals involved in this utterly senseless loss of so many lives. And of the hardships that was the fate of their hapless wives and children during a transitional period which Dunn has dubbed the "Vicwardian" era.

It is a highly moving and very well researched book which will appeal to history buffs and to people who are interested in the First World War and will make an ideal Christmas present.