A Ticket to Oblivion: A Railway Detective novel by Edward Marston 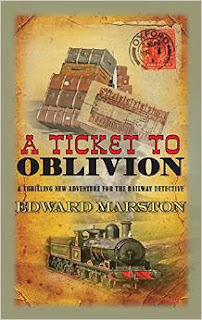 A Ticket to Oblivion: A Railway Detective novel by Edward Marston is a novel featuring the Railway Detective Detective Inspector Robert Colbeck and his assistant Detective Sergeant Victor Leaming are called upon by Superintendent  Tallis to take control of an urgent investigation in the county of Worcestershire.

For the daughter of a man selected to become the next Secretary of State for India has disappeared from a non-stop train from Worcester to Oxford.

It is 1858 and Imogen Burnhope is betrothed to an up-and-coming MP,  Clive Tunnadine, when she and her faithful maid, Rhoda vanish from a train taking them to visit relatives in Oxford.

But when the train arrives, they are missing. Her father, Sir Marcus Burnhope calls in some favours and gets Scotland Yard's top detective team put on the case.

As the case progresses, some dark secrets start to emerge. Is Clive Tunnadine MP all he appears to be? And why is Rhoda's hat discovered in a railway tunnel?

It is alleged by Clive Tunnadine that members of Imogen's own family are involved in the disappearance. But what proof does he have?

Colbeck realises that he is involved in a race against time to find out what happened to the two women, where they are and who they are with.

And what, exactly, is the involvement of a private detective Alban Kee (dismissed from Scotland Yard for corruptly receiving bribes from Criminals) in the case? He is withholding information, Colbeck is certain, but why? What has motivated him to do this?

Before the case is solved there are several murders,  a brutal attack on an innocent woman and  is more than one murder and Imogen and Rhoda find themselves in the clutches of some very dangerous and desperate individuals.

But can Colbeck and Leaming save them from a fate worse than death?

This is a very gripping novel written by a master storyteller.

It is published by Alison and Busby at £7.99 and will make a superb Christmas present for the lover of detective fiction.