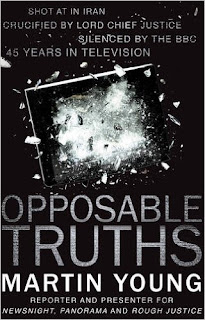 It is his autobiography and dips into his near half-century spent working in television, during which time he was involved in every major news and current affairs programme broadcast by the BBC.

It also has a great deal to say about the fights he became involved in with the political and legal establishments caused by his seminal series "Rough Justice" which brought about the release of five people all who had been falsely accused and wrongly convicted of serious crimes they had not committed.

Martin Young will also be remembered by viewers for his work as a foreign correspondent where he covered such troubled hotspots as Iran during the Iranian Revolution, Gaza and the West Bank.

He also, bravely, reported on the Mafia in both the USA and Sicily. Where he was very nearly murdered.

He writes as eloquently as a skilled journalist could be expected to and his style is witty and also, sparse and pacey. This is what modern journalists do, we have to write and rewrite our stories so 500 words can be reduced to 250 words so we can get more content told in fewer words.

We read of his experiences covering the Iranian Revolution, his time with the Rough Justice programme (which eventually earned him a Special Award for Journalism from the Royal Television Society) how he suddenly fell from grace and needed to earn some money quickly when the BBC (unfairly) suspended him without pay.

Work which brought him into contact with the Ford Motor Company (rewrite a manual, that'll be £600, please!) and with the world of the Soho voiceover industry, where actors are on a perpetual treadmill from one voice over studio to another and make a reasonable living by using the one skill that can't be taken from them, their voice.

In fact, not only did he make up the £9,000 he lost in salary from  the BBC, in the three month period of his suspension he actually made a very satisfying £27,000, made up of voice overs, media training of MPs and the like.

He also reveals what is was like on Nationwide, how he got his start in Independent TV before moving over to Nationwide at the BBC and various other incidents throughout his career, including nearly being murdered in Sicily.

It is an interesting book, my only minor criticism of this book is that it is not in any way sequential and does tend to flit backwards and forwards through time and from subject to subject.