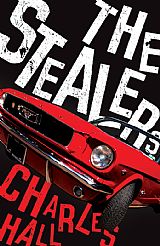 What could be easier? Just steal another car, in this case, a funky red 1966 classic Ford Mustang.

I mean, what could possibly go wrong?

In this particular occasion the gang rather stupidly targeted the 1966 red Ford Mustang owned by Jack Crane. You might remember Jack Crane from the other two novels by Charles Hall, Bad Faces and Sea Fort.

The gang of car thieves had stolen his beloved car and he was going to get it back. One way, or another.

But the gang of car thieves were more than just a gang of car thieves, they were far, far worse than that. And they had made the -often fatal- mistake of making themselves noticeable to a man who was even more capable of causing mayhem, destruction and death than they could dream of.

The dangerous man hunt traverses Europe from Eastern England to France and beyond as he begins to understand the true nature of the vile gang that stole his car.

They appeared to be implicated in child abduction too and as the body count begins to rise Crane realised that if he wanted to reclaim his car, escape with his life and crush his new-found enemies, he'd have to remember all of his SAS training to make sure that he got his car and escaped with his life.

This is a genuinely fast-paced crime thriller of a novel with many twists and turns in its 369 action-packed pages.

It is published by Matador at a rather modest £9.99 and is available from he That's Books and Entertainment bookshop powered by Amazon to the right of the site.
Posted by Martin S at 17:55