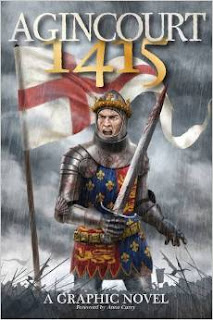 Agincourt 1415 is a novel that tells the story of the famed battle of Agincourt.

It tells it in the format of a graphic novel.

The author is Will Gill and the artist is Graeme Howard.

The historical consultant is Anne Curry.

The book tells, in accurate detail, the true story of Agincourt, of how a simple mistake by the leaders of the French forces put the French at a distinct disadvantage even before the battle had begun.

How the deadly and accurate bow work of the English and Welsh archers decimated the flower of the French Knightly classes in their dozens.

It a;sp tells how treachery against the chivalric values of the Medieval times tainted, for some people, the victory of King Henry V over his French rival.

Professor Curry has written the introduction to the book.

It costs £9.99 and will be available well before Christmas, as it is due to be published by Troubador on 25 October.

This book is a "must buy" present and, in my opinion, at least three copies should be in every school and college library.

It will be available via the That's Books and Entertainment bookshop which is on the righthand side of the site.