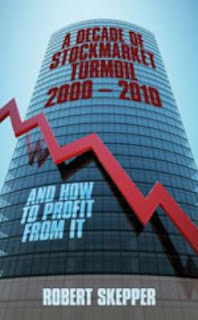 A Decade of Stockmarket Turmoil 2000 - 2010 And How to Profit From it by Robert Skepper
The causes and consequences of an unprecedented financial crisis that took capitalism to the brink of collapse.

The decade 2000-2010 has arguably been the most turbulent stock market period since trading began. Three crashes and an implosion of global economies on a monumental scale - and all in the blink of an eye in historical terms.

Many questions arise from this unprecedented crisis, not least of which is how and, more importantly, why capitalism was taken to the brink at a time of relative political stability, major technological advancement and economic buoyancy. In short, how, having been dealt such a favourable hand, did we (in the West) so nearly blow it?

This book examines the financial and political context of this decade of turmoil, seeking out the fault lines and tracing the causes and consequences. At the same time it analyses some of the key principles of sound financial investment, which if adhered to should enable the prudent investor to ride the wave and even come out on top.

R.B. Skepper graduated in history from Trinity College, Cambridge. He was a member of the British Olympic ski team that competed in the 1960 Winter Olympics. He started his City career with Buckmaster and Moore in the early 1960s, but then went to work abroad for five years.

From 1973 to 1985 he worked in the farming industry and then returned to the City, where he works as an associate of Brewin Dolphin, a leading private client brokers. He specialises in private client discretionary management, and personal/business pension schemes. He is married and lives in Suffolk.

Historical, financial and political examination of the most turbulent decade in stock market history
Financial analysis and advice from a seasoned expert, including a breakdown of the underlying permanent principles of sound investment

www.bookguild.co.uk
Posted by Martin S at 15:47