The Trial of Maria Montrecourt 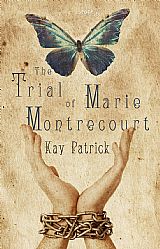 The Trial of Maria Montrecourt is a debut novel by Kay Patrick a thespian (RADA-trained) who has acted on Doctor Who (alongside William Hartnell) and was then an equally influential television director, including 20 years with Coronation Street.

It is 1899, and a young French girl, 18-year-old Maria Montrecourt, arrives in the Northern English town of Harrogate.

She is orphaned, yet is supported by a shadowy and mysterious benefactor.

Whilst Maria is struggling to find her footing in a strange and somewhat alien environment, she finds herself drawn into the early dawning of the battle for the rights of women.

But eventually the son of her benefactor hunts Maria out. And, gradually, over time a hideous and terrible secret begins to emerge.

Events that occurred many years before suddenly re-emerge from the past and these events have the power to alter the life that Maria thought she was living forever.

Soon Maria finds herself accused of monstrous sins and crimes and she finds herself alone, in a dark and dank cell, a guttering candle her only source of light, as she is on trial for her life, accused of a notorious and heinous murder.

Did Maria commit murder? Or was the whole case a ghastly mistake? Or was it something else?

This novel is not merely set in the latter part of the 19th century, it actually takes the reader back to that time, so evocative is the writing.

An ideal summertime read and extremely well priced at only £8.99.