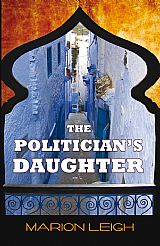 The Politician's Daughter is another Petra Minx mystery written by Marion Leigh.

Oddly enough this is the first mystery novel about RCMP sergeant Petra Minx, but the distribution of the novel has been taken over by Matador for the publisher Rudling House.

But to the matter in hand.

The daughter of a prominent Canadian politico took a job for the summer onboard the Titania, described as a megayacht.

Unfortunately, she went missing and so it was that Petra Minx, RCMP Marine Unit Sergeant, is ordered to cut short her holiday and to begin an investigation into the disappearance.

Due to the fact that secrecy is of the essence, Petra Minx decides that she will handle the case as an undercover investigation.

She obtains a position on the boat as a hostess. The Titania was the last place Emily, the missing girl, was seen alive.

But onboard are several surprises for Sergeant Minx, including the fact that her dear friend Carlo is working as a barman on the Titania, on behalf of Interpol.

Nobody on the Titania denies that Emily was there. But it would have been nice if all of the different stories for the reason why Emily left the Titania could have matched!

So, what exactly happened to Emily? Is she alive or dead? And exactly why is Carlo on board?

What does he know? What can he and Petra find out?

This is another exciting novel about a character who has the potential to become as famous as Poirot.

The book is published by Rudling House at £8.99 and is available via the That's Books and Entertainment bookshop, which you will find just to the right of this review.