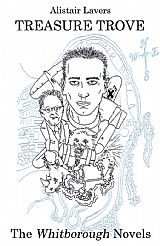 Treasure Trove is as new novel by Alistair Lavers.

Treasure Trove is dedicated to Barry Sheene and is proclaimed to be a part of the Whitborough novels. (It is actually the first book in the series.)

It starts at Whitborough Castle in July 1645, as the armourer for the Royalist garrison at the castle, Christopher Miller, is seeking out a key to the magazine and powder room.

But a young man bursts into the room and tells him that his attendance at a meeting is urgently required. The news is grim, Parliamentary forces will soon take the castle. They must attempt to flee the castle using secret tunnels to take them to boats for their escape.

But there is the matter of a strongbox liberated from a Spanish galleon, which had been part of the ill-fated Spanish Armada, 75 years before. It must not be allowed to fall into the hands of the rebel forces of Cromwell, so it will be hidden from their covetous grasp!

Time marches on and it is eventually the Easter weekend of 1983 in the now upmarket Yorkshire coastal resort of Whitborough on Sea.

The Spanish Armada treasure is found and is quickly lost, again.

Has an ancient curse been re-awakened?

How is the Royal Navy ship adopted by the town sunk by a genuine Civil War cannonball?

Are these events really as unconnected as it appears? Or is there a thread that, somehow, connects, them all together?

But they are only the harbinger of much worse troubles for the town, as catastrophe afflicts the authorities and puts the forces of law and order under a very real threat for their existence.

But who is behind these events? Some say Russian saboteurs, others blame Irish terrorists, still others blame local criminals who have startec events that they are no longer in control of, having got completely out of their depth?

However, all is not quite what it seems. What are the staff of the record shop exactly up to? Do they know what is happening? If so, what are their intentions?

This is a truly interesting novel. It is published by Matador at £7.99 in paperback and will be available via the that's Books and Entertainment bookshop. It is on the right hand side of this site.

Whitborough on Sea. It's good to be able to read about, but I certainly wouldn't want to visit that town!

Just buy the book, read it and you'll concur with me, I am certain!
Posted by Martin S at 15:25