Disclosure: The Future is Now 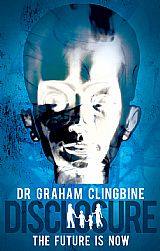 Disclosure: The Future is Now is a new sceince fiction novel by novelist and scientist Dr Graham Clingbine.

Dr Clingbine has a BSc and an MSc form the University of London in Biological Science and Neuroscience.

He has brought his considerable technical expertise to create a taut and compelling science fiction thriller.

The novel follows the life of Kevin Powell from his eight summer when we find him living with his mother, Sylvie.

As a young child he is subject to a a variety of unusual experiences that his youthful mind cannot comprehend or understand, trey as he might. He logically presumes that they are just a normal part of growing up and that everyone must go through the same experiences.

When he becomes a teenager, his mother falls prey to poor health and it is now Kevin's turn to look after her.

But all is not as it seems. His mother requires surgery to remove an object from her body. What is it? Where is it from? What was its purpose? Nobody knows.

However, Kevin knows that he has seen this before. When he was a child of eight.

By the time Kevin enters adulthood, he again falls victim to visions that seem to be realistic, yet also nightmare-like.

He sees a depopulated Earth, a vision from the future of his home world.

He loves his daughter, yet would he be able to sacrifice that love should it impinge on the future of planet Earth?

What, exactly, does Kevin's mother know? And where is his father?

The book relies heavily on Dr Clingbine's research into UFO sightings and the like.

Incidentally the latter portion of the book is made up of accounts of alien abductions, UFO sightings and the like.

It costs £9.99 and is published by Matador and is available from the That's Books and Entertainment bookshop.
Posted by Martin S at 19:58