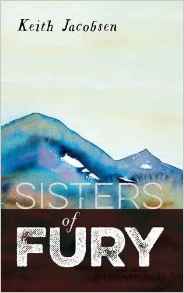 Sisters of Fury is a thriller by Keith Jackobsen.

It is set in the heady and exciting times of the late 1960s.

Jack Roberts is a northerner who comes from a family that is neither working class nor really middle class. sort of lower middle class, really, for want of a better description,

He is a bit of a drifter, intellectually speaking.  He has neither dreams for his future or ambitions.

But then he meets Hasan, a fellow student.

He and Hasan become good, close friends, and Jack idolises his new friend and he seems to become a new person, a person with hopes, dreams and ambitions.

But is Hasan all he seems? Is there a darker, edgier side to him?

But when their time at university comes to an end, it seems that Hasan just vanished from Jack's life.

So Jack returns to his aimless, intellectual drifter existence. But he never forgets about his exotic, somewhat mysterious friend.

Years later Jack learns that Hasan has written a book and is embarking on a tour to promote his book.

Intrigued, Jack decides to follow in the footsteps of his friend on the tour, yet decides, for some reason, to keep a distance between himself and his friend.

But then Jack notices that he is not the only person who is keeping Hasan under observation, for he is being tailed by a woman who seems to be fragile.

Jack meets the woman and realises that she might not be quite what she seems. For example, is she as fragile as she appears to be? And if she is, what caused her fragility?

Eventually Jack begins to understand that not only Hasaan is in danger, that he, too, could be at risk.

But from what? Or whom? And was Hasan all he had seemed to be?

This novel is described as Hitchcockian and as it exists in a maelstrom of angst, anger, mistrust and duplicity, that is as good a description as any.

It is published by The Book Guild and is available from the That's Books and Entertainment bookshop, to be found on the righthand side of this review.