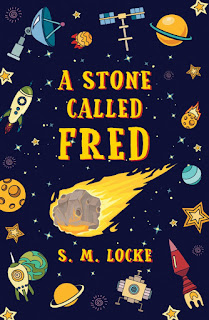 A Stone Called Fred is a debut novel from author Sheila Locke, which is aimed at children and young adults.

Teenager Jack Watts is prone to jump to conclusions far, far too quickly.

One morning he finds something on the kitchen table of his family home which Jack decides looks like an explosive device of some kind.

Jack warns the rest of the family about his discovery. But the device isn't, after all, an explosive device. However, it is an object of considerable mystery that propels Jack into a world of unexpected adventures and a considerable amount of trouble.

Joe, Jack's neighbour who lives downstairs, is more prone to be sceptical about the whole story. He appears to have been proven correct, for the "explosive device" turns out to be a common stone, often found in gardens or on the beach.

However, Jack thinks differently. After all, didn't he, later that same day, have some strange experiences with an unusual visitor who Jack decided to name "Fred"?

Fiona is Jack's girlfriend who is a journalist. When she returns home from an assignment she becomes impressed by the apparent power that the stone exudes and she decides to convince the others that it would be an awfully good idea to spy on members of the Royal Family at a theatrical event. However, things do not go according to her cunning plan.

Eventually Jack and Fred travel backward through time and end up in the early 20th century.

This is a very well-written book and will be a must have for many Christmas stockings this year.

Apparently it took author S. M. Locke 12 years to write this book from when she first had the idea. It is to be hoped that he second book, and other subsequent books, do not take 12 years to finish because she has a unique and very readable style.