A Most Unladylike Occupation 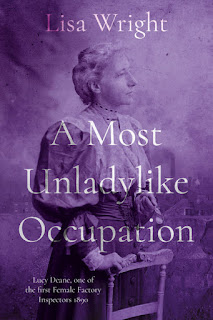 A Most Unladylike Occupation is an absolutely brilliant and highly important book from Lisa Wright.

It details the life and times of Lucy Deane, who was one of the first female factory inspectors in Victorian Britain.

Lucy Deane was appointed to the role of Factory Inspector in 1983 by Herbert Asquith, when he was Home Secretary.

She was sent to inspect and issue reports on the condition of women workers in factories all over the British Isles.

Some of the male factory inspectors were upset and appalled by what they perceived as this encroachment by females on what they believed was a male only preserve.

Lucy had four other female Factory Inspector colleagues. There were no precedents for what they were doing and nor was any specialist training available.

Lucy's family, which was of a somewhat upper class, were in the main upset and horrified about what they considered as her "unladylike occupation."

Someone had given Lucy a very useful tip when she started her new role. They had advised her to keep her own private records on every aspect of her job, what she did, the people she met and interacted with.

She kept these notes in a total of 23 cheap exercise books. It was these notes made between 1893 to 1898 that form the basis for this biography of her life as as a female factory inspector.

Her notes cover her day-to-day working life, the factories she visited, her home life with her sister Hyacinth, the problems she had with keeping her bicycles from crashing, her travels to and from work and noting how, over time, how the opinions of her male colleagues changed toward her as they eventually realised what an  asset she was.

She was awarded a CBE for her efforts during World War 1 when she had the onerous task of organising the Women's Land Army.

There are also a collection of illustrations to accompany this remarkable biography.

It is published by The Book Guild at £9.99. This book will be of interest to anyone interested in Victorian history, feminist history, the early days of factory inspection or those who love a good biography. It'll make a fantastic Christmas gift.
Posted by Martin S at 15:22