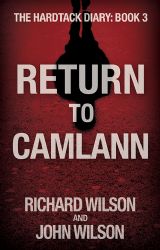 This is the last part in the three part thriller series by writing team Richard and John Wilson, featuring their character Hardington "Hardtack" Tachman.

We catch up with Hardtack as recent history catches up with him. Well, not his history, exactly, but it is a history that will impinge greatly on his own life.

Because, suddenly, Hardtack is becoming the victim of a number of cases of mistaken identity.

This is because he is being mistaken for his twin brother, the existence of which he was completely ignorant.

The book starts at breakneck speed which rarely, if ever, falters.

After events that can only be described as truly horrifying, Hardtack makes his way back to America.

His wife, Mei Li, who has lost her memory, is now living with her lover in Italy.

Eventually he is reunited in America with his wife and they take a trip down to Mexico with Maria, who he has began to have an affair with.

However, in Mexico they are seen by Cartel members who mistake Hardtack for a DEA agent, Hardtack's mysterious twin brother.

There are fatal consequences fro some members of the group.

Subsequently Hardtack finds himself in the southwest of America where he is slated to attend a conference.

Because he still has doubts about the fidelity of his wife, he begins a relationship with another woman.

However, it transpires that the conference is a sham and that his new lover was not what she appeared to be.

In the town of Camlann true identities became known and stunning secrets are revealed as there is an utterly shocking denouement when the reality of what has been planned is revealed.

But what, exactly, has happened? And to whom?

The book is published bv Matador at £9.99 and is available (with the first two books in the series) from https://goo.gl/wdCFDG.
Posted by Martin S at 20:54