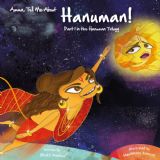 Hanuman is another in the brightly illustrated and well-written books in  the "Amma Tell Me" series written by Bhakti Mathur and illustrated by Maulshree Somani.

This is the first of a series of three books that tell the story of the character Hanuman, and the Hindu festival of Durga, introducing younger children to the Hindu religion,  yet doing so in a way that is not preachy and also fun.

Bhakti uses rhyming prose to tell the story of Hanuman, from his birth to his attempt to eat the sun (he mistook him for a juicy mango!) his attack by Indra and his miraculous recovery with divine power, strength and intelligence, when Indra repented of what he had done.

And how he forgot his powers until they would be called upon again.

The book helps youngsters to learn about characters from the Hindu religion, such as Anjana, Brahma, Indra, Shiva, Vaanars and Vayu.

It is a colourful, large format book published by Anjana Publishing and is available for purchase here https://goo.gl/wdCFDG.
Posted by Martin S at 15:59