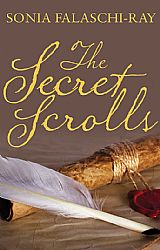 The Secret Scrolls tells the story of historian Verity Hunter who has discovered a chest hidden for two Millennia in a catacomb in Sicily.

When she opens the chest she is astounded to find that it is stuffed with documents.

Together with a classicist colleague, Crispian Goodman, they work feverishly to translate the documents and put them back before anyone else becomes aware of their existence.

Once the content is revealed, there develops a major fight for possession of the documents and the information that they contain.

For they are of great doctrinally sensitivity. And it is for this reason that the Catholic Church believes they should be transferred to the Vatican to ensure that they are taken into safe custody, as it were.

The director of the catacombs wants them kept for a tourist attraction, historians and theologians want them for their historical data and someone who is charged with their restoration is fully aware of their true financial value.

However, who is the mysterious Russian private collector of religious artefacts and relics? And does he really have links with the Mafia?

But. Are the genuine? And if they are, what is the likely outcome of their existence?

The book is exciting and the story is propelled along with pace, but not excessive speed, thankfully!

But as well as being exciting and entertaining it does something Dan Brown has never done in his works. It is genuinely thought-provoking.

So this book out Dan Browns Dan Brown!

It costs £9.99 and can be bought via the That's Book and Entertainment bookshop which you will find to the right hand side of this book review.