Release From Stasis The Future is now 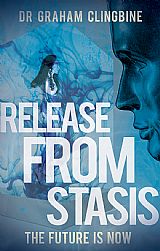 Release From Stasis The Future is now is a new novel by scientist, writer and author Dr Graham Clingbine, BSc, MSc.

The book is set in a far, distant future. Earth is dramatically different, it is under constant bombardment with deadly solar radiation which is being emitted by the ageing Sun.

John Powell -the father of Kevin Powell, seen in the earlier novel Disclosure, is the last surviving member of the human race.

He has a scheme to help repopulate the Earth by kidnapping humans from the past times of planet Earth and genetically modifying them so that they would be able to survive in the harsh environment of future Earth.

But there is a violent solar eruption that is so unprecedented in its sheer violence that all of his human test subjects are wiped out.

John Powell takes his family and a few other survivors aboard a spaceship and they flee planet Earth to undertake a long journey through space, safely placed in stasis.

When they become released from stasis John and his family are bewildered to discover that the other occupants of the ship have formed to opposing religions, Muons and Pions.

The groups are divided one against the other and, as a consequence, are at war.

John and his family decide to escape from the strife and, by employing a time-travel portal device, they are able to leave the ship and return to an earlier incarnation of Earth and start over, again.

The ship carrying the Muons and the Pions lands on a planet that is habitable and the two groups are left to work out their own destinies.

This science fiction novel costs £9.99 paperback and £15.99 haqrdback and is available from the That's Books and Entertainment book shop, which you will find to the right hand side of this book review.
Posted by Martin S at 00:28