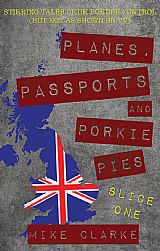 Planes, Passports and Porkie Pies - Slice One is a fascinating read about what life was really like as an Immigration Control officer in the UK.

And, as author Mike Clarke points out, it's certainly nothing like as seen on TV!

Mike gives a genuine behind the scenes look at what it was like being involved in Immigration Control in and around London, working at Gatwick, Heathrow and Stansted Airports, then actually on the streets of London itself.

All of the stories contained in his book are utterly true. Though some names and some details may well have been changed in order to protect the innocent and the not-so-innocent. And also, as Mike points out, the details are as accurate as his own fallible memory allows.

There's the story of the Nigerian bank robber who was apprehended at the airport with the proceeds of his bank robbery found badly concealed about his person.

He was sent back to Nigeria. And was executed by firing squad almost as soon as he had been bundled off the plane.

There were forged passports, some that were so clever that they were hard to spot (these were the long ago days before barcodes and pre-electronics)  and some that were so badly done that the Immigration Control officers must have wondered exactly what on earth they had been thinking!

For example the man who had on hi date of birth no day, no month, just the year of 1845.

This would have made him to be 127 years of age.

And in the space for occupation was written 'witchdoctor.'

The passport had stamps in it showing he had visited the UK several times had had only ever made short visits each time.

He was, once again, allowed in to the country. Probably just as well, really...

There were stories of 'helpful' MPs sticking their noses in to cases, a weird assortment of liars and chancers (that's not the MPs, by the way) and people who pretended to be children but who, in reality, were almost certainly were really adult Pakistanis, one of whom had x-rays but forgot he had a finger missing, or not, according to his x-rays. Or could this mean they weren't actually his x-rays. Oops!

This book is well worth the £9.99 price. It's published by Matador and will be available from all good shops, including the That's Books and Entertainment book shop which you will find to the right hand side of this book review.