'The Austerity Olympics' - When The Games Came To London In 1948 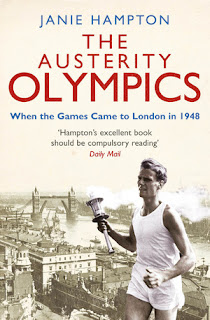 Janie Hampton's acclaimed The Austerity Olympics vividly depicts the last time the Games came to London. Her tales of teams ferried to events on double-decker buses, billeted in army camps and sewing their own kits are a world away from the lavish 2012 arenas and massive regeneration of Stratford East.

The 1948 London Olympics demonstrated what a fantastic Games could be organised on just £760,000 - and still make a profit. The main stadium was cleared of greyhound racing to allow great athletes such as Emil Zatopek and Fanny Blankers-Koen to thrill the indomitable Londoners who cheerfully overcame every obstacle, from food rationing to terrible weather.

Entertaining, revealing and highly-readable, this meticulously researched book is full of first-hand interviews, hilarious anecdotes, and spirited athletic feats. The Austerity Olympics is a fascinating book about an extraordinary event.

Published to coincide with BBC film based on the book - Bert & Dickie airing in May
Contains over 200 original interviews with entertaining anecdotes that make great material for review, extract and radio coverage.

Shortlisted for William Hill Sports Book of the Year

Janie Hampton has written over 15 books, from biography to fiction. She is the author of the critically acclaimed biography of Joyce Grenfell; and appears regularly on radio, in print and at literary festivals.

She is the leading authority on the social history of the Olympic Games in London and is Olympics Correspondent of The Oldie Magazine. She lives in Oxford.