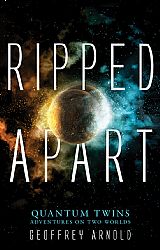 Ripped Apart is a novel by Geoffrey Arnold.

It is a science fiction novel that tells the story of the twins.

Geoffrey Arnold relates that the story is based on what the twins told him, and that this process started, not very far from the Midlands city of Birmingham, one Saturday afternoon, when he took a notepad and a pen and began to transcribe the story (a true story, they assured him) of what had happened to them.

The book is a part of a four part series based on their recollections, "Quantum Twins -Adventures of Two Worlds."

Somehow thrust out of their own, very different, dimension, a boy and a girl (the twins) find themselves separated for the very first time ever at age 15, with the whole of planet Earth between them.

Even their telepathic link is severed. Which must have been devastating for them, as this was the first time they were not only alone from others of their kind, but of each other, too.

They revealed to Geoffrey that they were not the first of their people to visit the Earth. That others of their people had arrived here 75,000 previously. And were, in fact, the ancestors of the human race that populates the Earth.

The twins, coming from a place that is harmonious and at peace, are shocked and horrified at the situation that they find on Earth.

The twins were desperate to be reunited and they required the help of the humans of Earth if this reunification of the twins was to happen.

They also needed to avoid detection and capture and to, eventually, return to their own home.

True or the work of an exceptionally active imagination?  It doesn't matter, because Geoffrey Coldfield tells a good story.

It's £8.97 in paperback and is, of course, available from the That's Books bookshop, to the right hand side of this review.
Posted by Martin S at 11:25