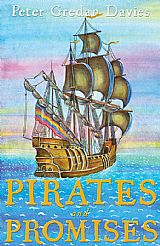 Pirates and Promises is a new adventure book written especially for children by Peter Gredan Davies.

Whilst he was enjoying a holiday in the beautiful coastal village of Mousehole, Peter (who hales from Portwrinkle) discovered that in 1595 there was a Spanish attack on both Mousehole and also on the town of Penzance when the Spanish invaders set both of those Cornish towns ablaze.

Intrigued, Peter undertook further research and discovered that the coast of Cornwall was subject to frequent and numerous attacks by the Barbary pirates of North Africa.

He combined his research with his lifelong passion for the sea (he is a former Royal Navy officer and a seaman) to provide the basis for his novel, Pirates and Promises, which is written for children aged from 9 to 12.

Becca and Jack Tremayne are twins living in Cornwall. They find a mysterious man, Azfer Hakeem, shipwrecked on a neighbouring beach and they save his life.

But there is much more to Azfer Hakeem than appears at first sight. For it transpires that he is of the royalty of the country called Lebanon.

He is in command of a fleet of armed merchantmen, ships that trade between Europe and the Mediterranean.

However, under the circumstances of them saving him from certain death, Azfer Hakeem feels honour bound to assist the twins in their desire to locate and rescue their parents, Kerenza and Brethoc, who had fallen prey to Barbary pirate two years before.

During his recuperation he and the children build up a genuine rapport and, whilst showing them is magic tricks and regaling them with tales of his distant travels, he begins to formulate a plan of how he could use his royal and diplomatic connections to discover the fate of the parents and to rescue them, if possible.

He uses his network of spies to find that Kerenza is being help captive in the court of the Governor of Algiers, and there are rumours that Brethoc is enslaved to the team of rowers on a galley.

Eventually, Azfer Hakeem is well enough to command his brave and resourceful crew of all nations to take the twins on an adventurous and perilous mission to attempt to locate and rescue their parents.

Will they survive? Will they find their parents? Can they rescue them?

Buy this book as a Christmas present and you and your children can learn for themselves!

The book is published by Matador at a very reasonable £6.99. It's also available from the That's Books and Entertainment Amazon-powered bookshop (you'll find it to the right hand side of this book review) but if you want it before Christmas, we would suggest you go for one of the faster delivery options.)