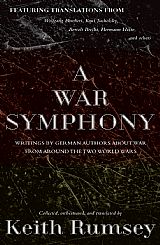 A War Symphony is a new book by Keith Rumsey.

In it, Keith Rumsey, who is an academic expert in the German language, take a collection of writings in the original German and translates them into English.

The writings are taken from the periods between the World Wars and beyond into the mid-1950s.

they offer the reader a compelling and different view on the impact of both wars on the ordinary people of Germany, but, obviously, from a Germanic perspective.

The writings were all created by influential German writers.

You will igially written by a wide range of German voices, such as Hermann Hesse, Bertolt Brecht, Hans Bender, Elisabeth Langgasser and Ernst Glaser.

They all make reference to war on one way or another, yet they are not specifically war stories, as such.

They touch on a wide range of subject matter, such as the impact of war on both military personnel and on the civilian population.

Some are stridently anti-war, others are less so, but still manage to convey the futility of war and those who are more strident in their attitudes place the entire blame for the two World Wars on nationalism.

There are elements of humour and filled with sympathy for the victims of war.

The book is published by Matador and costs £7.99 in paperback.

It is available through the That's Books and Entertainment bookshop, which is to be found to the right hand side of this review.
Posted by Martin S at 16:49