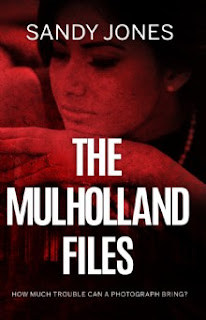 In the debut thriller from Sandy Jones, The Mulholland Files, we meet Edward.

Edward is luxuriating in his partial retirement enjoying himself, greatly.

However, the arrival of a mystery photograph on the doormat of his home drags him back into a world that he had hoped he had been able to put behind him.

His relationship with Abby, his new relationship, is put under strain, especially when it transpires that not only is his life in  danger, that the life of Abby is at risk, also.

Things are not what they might appear. The waters become even more muddied, and Edward finds that his options are limited.

Can he work out exactly what is happening, find out who is behind it or will he and Abby lose their lives before he can recognise the source of the danger and neutralise it? And what are The Mulholland Files?

This is a very good debut novel. The first of many books from Sandy Jones? I certainly hope so.

It's published by Matador at £9.99 and should be making an appearance in many Christmas stockings this year.
Posted by Martin S at 12:27