A Season in the sun 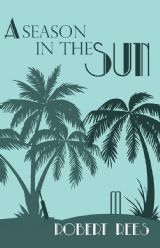 A Season in the Sun is a debut crime novel from Robert Rees.

It tells the tale of Henry Fanshawe who is following in his family's tradition of trading in commodities, in his case, spices.

He is the last member of the once considerable established firm of Fanshawe's Commodities, in the City of London.

He leads a fairly unremarkable and rather quiet life, but he finds the new version of the city of London not to his liking. Especially after he loses his position after he is dismissed on trumpeds up allegations of financial impropriety.

However, all is not lost. A legacy from a wealthy aunt means that Henry will be able to live in the Seychelles. However, there is one caveat, he must take over the management of her Village Cricket Club.

And also push it and its team hard enough for them to attain fame and renown in the nascent Seychelles Cricket League. Not that much of a problem, one might think?

But although his amateur team are willing, in general, and talented, things do not always go according to plan. This is not helped by the fact the the team is home to a very senior police officer, a former ex-county level player and a drug using fast bowler.

But those problems are small potatoes when the team and its manager find they are facing the dark forces of organised crime and gambling.

How does this team of plucky, but determined amateurs make out against the forces of Cricketing darkness? For a modest £8.99 you can find out! Purchase your copy at https://goo.gl/wdCFDG.