Out of Bounds by Bruce Hugman 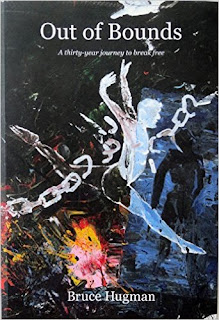 Out of Bounds by Bruce Hugman is an exceptionally well-written autobiography by the noted published author.

It is the story of how Bruce Hugman grew up as a child who was kept within strictly enforced parameters that were designed to create a young man who would perfectly conform to what post-war society and his family would expect of him.

But that wasn't what Bruce wanted to be about at all!

He wanted to explore his own nature, to seek out variety and adventure and to find out his own destiny in terms of himself as a human and in terms of his sexual identity.

He did very well at both Solihull School and at Oxford and began to learn what life was really about during his time working with so-called delinquent teenagers at a residential school in Scotland.

He finds himself conforming during his first "real" job, though a decision to retrain and a new career as a probation officer in Sheffield helps him learn more about life and himself, through his associations with his clients, described as "drug-takers and prostitutes."

Eventually he moves south and find a variety of different jobs working in the kitchens of a well-appointed restaurant and later a six month stint as a farm labourer until he finds gainful employment more in line with his previous experience and his formal qualifications.

He describes himself as "gifted, sociable and restless."

The fact that at a time of considerable opposition and often open hostility to people who were gay, makes the three decade struggle for Bruce Hugman to come to terms with his sexuality all the more moving and poignant.

The book takes the read through until the 1970s.

It is a thoughtful book and is profusely illustrated throughout with a variety of photographs.

The stunning cover art is by Paradorn Warrapinyaporn.

It is, of course, available through the That's Books and Entertainment online shop, situated to the right hand site of the site.
Posted by Martin S at 19:25